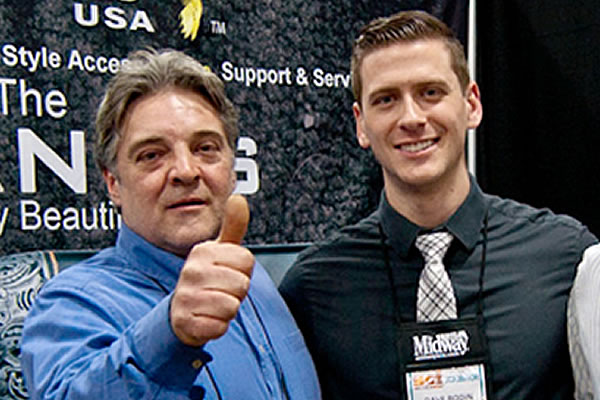 Paolo Peli is a man of profound vision and accomplishment. As head gunmaker at FAMARS for 25 years, he brought unprecedented innovation to his craft; his many patented designs testify to his status as a true master. Yet to my mind, the level of passion Paolo consistently brings to his work is what separates from the rest of his colleagues around the world.

I am honored to call Paolo my friend and business partner. Together we purchased the name and trademark of his former employer and created PMP ARMI, the company that in turn has launched the FAMARS USA brand.

I could tell you a great deal about this great man, but I think that Paolo himself is best-suited to express his story. All I can add is that FAMARS USA, in its unrivaled marriage of artisanship and art, in its advanced technology and aesthetic beauty, in its commitment to delivering world-class services to its clients around the world, is a reflection of the mind and heart of Paolo Peli.

My family had its initial approach to the world of arms just after the First World War, the Great War. My grandfather, Marcello Peli, born in 1899, worked as carpenter to earn his bread and he learned to encase the stocks of the guns for small artisans in Gardone Valtrompia. Four sons were born from his marriage, and all become gunsmiths. One of them is my father, Eugenio Peli, a great man. I learned everything from him both in the profession and in life. He has been a workman in the Beretta factory for 37 years, where he met my mother, a worker there too. From their union my brother Giorgio, my sister Loretta and I were born. Giorgio followed in the footsteps of our father and went to work for the same company when he was just a young boy. He rose from the entry level to reach an important office.

Since I was a child arms have fascinated me to the point that I spent my days watching my father and his brothers as they did their best to help the family and turned their passion for guns into some extra work and of course extra money. I spent all my days watching them in the equipped laboratory under my house where later I worked and learned. After the professional high school graduation I was forced to work in many different businesses that I have never loved, and which had nothing to do with armory, guns and arms. My vocation stagnated, and I lived those years in dissatisfaction. And in fact every day, once I had finished work, I returned in our home gun laboratory. Every single day.

So I learned the tricks of this trade, and when I was 18 I had my big chance. I joined FAMARS, a company that was small, but that was already renowned around the world for its greatness. My uncle, Mario Peli, who was FAMARS co-founder Mario Abbiatico’s friend, had been working there for years and got me my interview. I remember that day as if it was yesterday; I met for the first time Remo Salvinelli and Cristina Abbiatico, I talked with them, and that same afternoon I was working for FAMARS. This was my life. FAMARS was my life for 25 years.

I began to have my first little successes, I worked on the Rombo and the Tribute. I learned to really know the guns. As time went by I was able to propose my own new ideas, which then turned out to be useful for the company. For example I designed new guns, such as the over under with gunlocks and central sidelock – an innovation that will be utilized on the side by side. But my dream, that one that I have thought since I was young, the one that was in my heart and in my mind for all the time of my life, was still just a dream.

Thanks to my efforts, to my ability and to the people who believed in me, that dream came true on 28 June 2013 with new projects, new ideas and especially with a new brand: PMP.

In retracing my entire life in these few lines, I thought again about one of the earliest inspirations that guided me, one of my favorite quotes. Steve Jobs, American inventor and entrepreneur, and a charismatic and fascinating personality of our time, during his speech at Stanford University, said: “You can’t connect the dots looking forward. You can only connect them looking backwards. So you have to trust that the dots will somehow connect in your future. You have to trust in something: your gut, destiny, life, karma, whatever. Because believing that the dots will connect down the road will give you the confidence to follow your heart, even when it leads you off the well-worn path… You’ve got to find what you love. And that is as true for your work as it is for your lovers… The only way to do great work is to love what you do. If you haven’t found it yet, keep looking. Don’t settle.”